To improve the lives of at risk youth, children with disabilities and veterans and their families

Wendell (Windy) Rogers, the founder of AMSCO (Automatic Screw Machine Tool and Supply Company), staked his independence early and scored big in business and pleasure by following some simple principles: 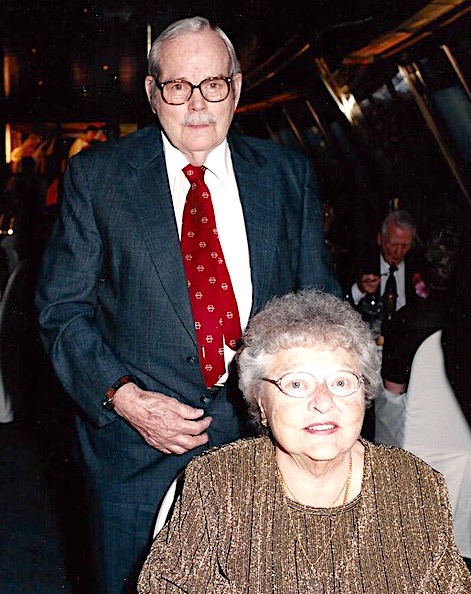 Windy started out life working on the family farm, dropped out of school before finishing the 10th grade, and joined the Navy shortly after turning 21.  While in the Navy, Windy went to school at the Ford Naval School near the Ford Rouge Steel plant where he learned about industry, math, and engineering principles.  It was while stationed in Detroit that Windy met his wife of 67 years, Doris Rogers. Windy and Doris dated while he continued on at the Ford Naval School, and Doris attended Michigan State University.  Upon completing his training, Windy was assigned to the USS Swenning, Destroyer Escort (DE 394) where he cruised the Atlantic from Newfoundland to Casablanca. Later during his tour, he was assigned to one of the Admiralty Islands that was formerly a Japanese base.  Windy’s job there was setting up a machine shop to repair the hardware that secured the guns on the ship decks.

Upon returning from the war in 1945, Windy joined his wife Doris in Rosedale Park, Detroit and went to work for his father-in-law selling equipment.  Windy already knew that he wanted to resell manufactured parts and machines, so this was the ideal opportunity for him. His father-in-law, Browney passed away in 1948, it was not long after the loss of his friend and mentor that he started his own company in 1950.  Over the years, the company grew and changed and taught Windy many life lessons and during all of it, Doris, was by his side helping him manage the business of their company. It was not until after Windy’s death at 94 years of age in 2016 that AMSCO was sold to a family relative to continue the legacy.

On the personal side, Windy and Doris lived a long and prosperous life.  They worked hard and were not hesitant to use their prosperity to enjoy their life and spoil their friends and family.  Windy and Doris enjoyed golfing, bowling, playing in Euchre tournaments, and traveling with their friends. While Windy and Doris never had children of their own, they spent many happy days with their (more than 30) nieces, nephews, great nieces and great nephews.  Doris would often say “your babies are our babies” and with that they became the doting aunt and uncle.

It is in memory of Windy’s service in the military and the good times they spent with their many friends and family members that they have founded this organization to support the things that meant most to them during their lifetime.

How We Can Help

To honor Wendell and Doris Rogers, the WD Rogers Foundation is focused on supporting organizations that support and improve the lives of: